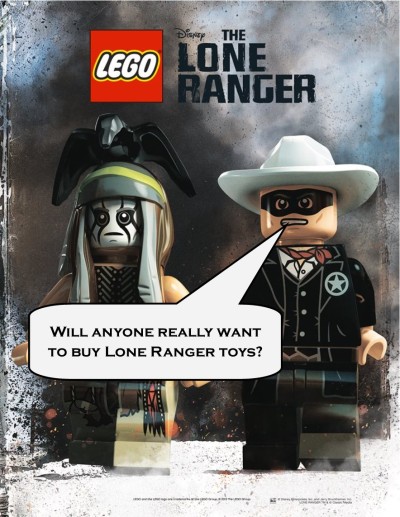 “The Lone Ranger” can’t seem to ride away from scathing reviews from critics, with some comparing it to Will Smith’s 1999 epic disaster, “Wild Wild West,” according to CBS.

The $250,000,000 film is currently hovering at 22% on film review site Rotten Tomatoes, according to the Business Insider.

The San Francisco Chronicle’s Mick LaSalle finds the mix of tones bizarre, calling the film “an action-movie bloodbath for a children’s audience.” He scathingly adds, “But put aside the notion that children shouldn’t see this film. No one should. ‘The Lone Ranger’ is a movie for the whole family … to avoid. It represents 2 1/2 of the longest hours on record, a jumbled botch that is so confused in its purpose and so charmless in its effect that it must be seen to be believed, but better yet, no. Don’t see it, don’t believe it, not unless a case of restless leg syndrome sounds like a fun time at the movies.”

“‘The Lone Ranger’ revels in its sense of excess but it doesn’t get fun until that final twenty minutes. It’s hard to deny that the final chase in and around two moving trains is entertaining and ‘The William Tell Overture’ helps things immensely. That’s the only part of the movie when Hammer seems to be channeling the real Lone Ranger. As a Western action-comedy, this finds a middle ground between the awfulness of ‘The Wild Wild West’ and the solid entertainment of ‘Maverick.’ Verbinski gives a nod to the TV series by desaturating color in some scenes, thereby reducing almost everything to a monochrome. Somehow, that seems to be an appropriate metaphor for a motion picture that’s tone deaf and wasteful of blockbuster dollars. The Lone Ranger will continue to ride in the memories of fans but this is likely the last time he’ll ride in a major motion picture.” — James Berardinelli, ReelViews.com.

Audiences expecting a Pirates of the Panhandle from Verbinski — who paired with Depp on that swashbuckling franchise as well as on the ingeniously eccentric animated Western Rango — are in for some serious dry stretches. (NPR)

Ty Burr of the Boston Globe writes that “Gore Verbinski’s bloated, overlong, $250-million western comedy is like watching an elephant tap dance in your living room: Everything gets trampled and the dancing’s not very good.” In the title role, Armie Hammer is “a washout … bland and peevish and uninteresting,” and Depp, playing the sidekick Tonto, mostly “mugs, widens his eyes, and shoots off whimsical one-liners in Injun-speak.”

Armie Hammer and Johnny Depp make for an appealing pair of leads, but they’re not enough to make up for The Lone Ranger’s bland script, bloated length, and blaring action overkill. (Rotten Tomatoes)