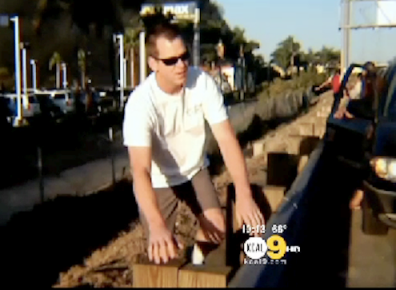 Bob Michels and his family were headed to Disneyland when they witnessed a horrific fiery crash in Oxnard, on Saturday, according to CBS News. Bob actually jumped a fence onto the Carmax lot where a truck that drove off the highway was burning – and he pulled the driver out of the truck.

Bob’s daughter Amy shot a video on her cell phone that the huge fireball that engulfed the truck.  You can watch video of the crash here.

News of Michel’s heroism followed the family to Disneyland. When he got to the theme park, he was named Honorary Citizen For the Day, CBS reports.